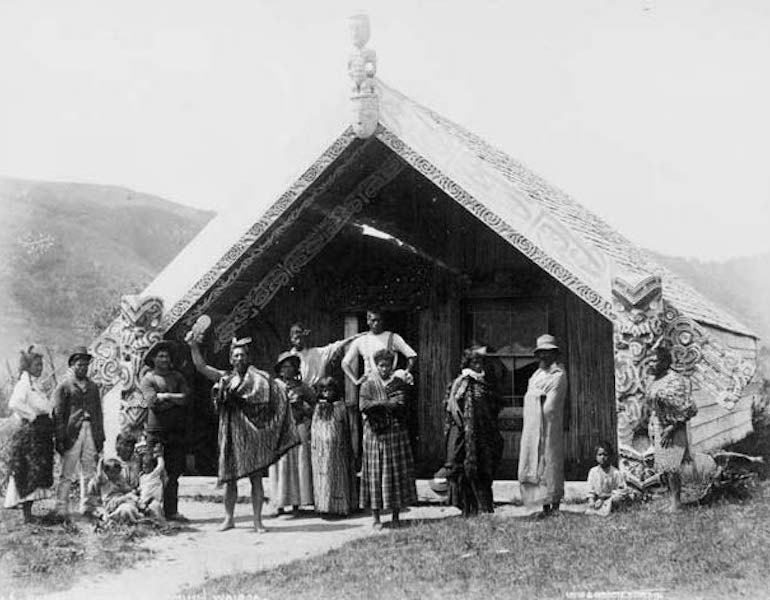 A book telling the fascinating story of a Te Arawa taonga has been launched.

The launch of Hinemihi: Te Hokinga - The Return was held at the Rotorua Library on Wednesday night, with a large number of people gathering for the occasion.

The book follows the life journey of the carved house Hinemihi, the historic meeting house which survived the Tarawera eruption. In the 1890s the Earl of Onslow, William Hiller, bought the entire meeting house as a souvenir. The meeting house was moved to Clandon Park in Surrey, England. As the result of a landmark exchange agreement between many parties, Hinemihi o Te Ao Tawhito is planned to return Aotearoa, after over a century standing in the gardens of Clandon Park.

Author Hamish Coney said the idea for this book morphed from putting a catalogue together for New Zealand photographer Mark Adams' 2020 exhibition Hinemihi: Te Hokinga - The Return in Auckland. "Mark is a great New Zealand photographer and it was an absolute privilege to work with him." He said the book was the result of just over a year's solid work. "One of the things that was important for me was to give some context around Hinemihi in terms of being a work of art. It's a masterpiece by two of New Zealand's greatest artists."

Hamish also thanked and acknowledged all who had helped the book come to fruition. Dr Keri-Anne Wikitera (Tūhourangi) is one of the contributors to the book. Her doctoral thesis was Māori Spaces in Foreign Places: Hinemihi o Te Ao Tawhito. She talked at the launch about how herself and her sister had visited Hinemihi in Clandon Park. "As we walked around the corner the tears started falling and we felt her wairua." Dr Keri-Anne said Hinemihi had not only endured the Tarawera eruption, bombings of England and the Clandon Manor fire, but also that she was away from her homeland. She said Hinemihi was an example of the saying, "You can take the girl out of the country, but you can't take the country out of the girl".

Jim Schuster has connections to Hinemihi as a descendant, a conservator and a lobbyist, both in England and Aotearoa, for his kuia's return. One of Hinemihi's carvers was Jim's great, great grandfather, Tene Waitere. At the launch Jim recounted his first meeting with Hinemihi, when he travelled there with family, and he said the tears had poured. "She's away on her own in this English countryside looking lovely, missing her people."

During the launch, Rotorua mayor Steve Chadwick said she was thrilled to be there. She said it had been a long-standing goal of hers and many others to get Hinemihi back home - "The story is so extraordinary”.

The book is available from good book retailers including Mcleods in Rotorua.