A Ngati Rongomai settlement east of Hauparu at the present junction of SH 30 and the Lake Okataina access road. Though undoubtedly always a preferred residential area for Ngati Rongomai, a fortified site named Whakairingatoto, west of the bay and on the high land overlooking the lake, was generally occupied and probably a refuge in times of danger. Once Christianity had been introduced, Te Ruato became the permanent residential area.

Traditions concerning Te Ruato seem to begin during the time of Tutanekai who, while staying there, lost two valuable mako ear ornaments named Taipupuhi and Tuperenui. Soon afterwards they were discovered by Morewhati, a son of Pikiao 1, who handed them back to Tutanekai, receiving Tuperenui as a reward. Morewhati later exchanged this with a Taupo man for a feather cloak. Tutanekai considered this an insult, raised a war party and ultimately killed Morewhati and his brother Tamakari, setting in train a series of violent affairs.

Sometime later there were problems in the bush behind Te Ruato when Te Whakaruru of Ngati Te Takinga went there to take a tree for a canoe. The tree he chose was one named Rakeiao, claimed by Ngati Tarawhai as their own. A party from Okataina led by Tiko and Taiorurua went immediately to remonstrate with Te Whakaruru. He however ignored them and continued felling the tree.

Tiko and Taiorurua went on to Te Ruato and persuaded the people there to support an action against Te Whakaruru. As a result they were armed and waiting as Te Whakaruru returned after the tree had fallen He was challenged as he arrived at Te Ruato and told he must give the tree over to Ngati Tarawhai. This he refused to do and a scuffle broke out during which he was speared by Tuahia and killed. His body was said to have fallen into the stream, which gave rise to its name, Te Whakaruru.

During the mid-1830s a considerable number of Ngati Tarawhai moved from Okataina to Te Ruato and established a settlement there and another one further east at Te Kotukutuku, near Punawhakareia. As expert carvers and canoe builders they found these settlements much more convenient than Okataina.

There was tremendous excitement at Te Ruato during 1853 when it served as the departure point for a war party og Ngati Pikiao. They were travelling to Te Ariki at Tarawera to assist Ngati Rangitihi fight against Ngati Tuhourangi. Hostilities had arisen there due to an attempt to commercialise the famous Pink and White Terraces at Rotomahana.

Abraham Warrick was an early trader in the Bay of Plenty. He married Ngakarauna, a daughter of the Ngati Rangitihi chief Paerau. With an eye to business the family built a house near the White Terrace at Rotomahana. Apart from his normal trading for flax with the locals, Warrick and his father-in-law apparently set a charge for viewing the terraces and offered a professional guiding service. The Ngati Taoi hapu of Tuhourangi, led by their chief Te Rangiheuea, went to Rotomahana, pulled Warrick’s house down and ejected the family from the area.

Paerau then went to Motutawa Island at Rotokakahi and challenged Te Rangiheuea and his people to battle. A visiting waikato chief, Matenga Te Whiwhi, attempted to make peace but was unsuccessful in preventing Ngati Rangitihi and Tuhourangi meeting to fight at Te Ariki. Ngati Rangitihi were defeated and their chief Te Hokuwhakarau was killed.

Ngati Rangitihi then embarked on another campaign, this time drawing allies from Ngati Whakaue at Rotorua and Ngati Tarawhai from Okataina. This party also attacked Tuhourangi at Te Ariki but were once again defeated with the loss of their chiefs Paerau, Te Timu and Te Wharerau.

Still determined to fight, Ngati Rangitihi raised yet another war party, this time securing allies not only from Ngati Whakaue and Ngati Tarawhai but also from many of Ngati Pikiao and a group of Tuhoe. For this engagement Ngati Pikiao dragged a number of canoes from Te Ruato to Okataina, and from there to Tarawera. Among the named canoes Parehaki was later returned to Te Rotoiti and came into the possession of Tieri Te Tikao. In later years it was abandoned and lay almost concealed in the swamp at Korokitewao until the mid twentieth century.

The combined forces launched their attack at Te Ariki but it too turned into a disaster fr the attackers. Among those killed were the chiefs Te Tikao, Kairau, Te Kirikau, Te Paki, Te Kaipuke and his brother Himiona. None of Tuhourangi died. The return of the defeated group to Te Rotoiti was a sad one and their first pint of arrival was again Te Ruato. The residents and others nearby gathered to tangi for the dead. The bodies of the slain were then taken to Tapuaeharuru where most of Te Arawa assembled for the major tangihanga. Later the bodies were interred on Pateko Island to be later exhumed for removal to other traditional urupa.

More battles followed but a peace treaty was eventually concluded. Mission records of the time suggest that the battles at Te Ariki began during April 1853 and continued until peace was made during April/May 1854.

A number of saw pits were established at Te Ruato soon after the mid-nineteenth century. Pita Te Wharetoroa owned one and provided wood for the construction of several houses and also for the first government school at Te Akau. Himiona Te Pikikotuku owned another and timber cut by him was used by Te Tuapu of Ngati Rangiwewehi to build a boat named Makurata. Ratema Ngamuka operated a pit where he cut weatherboards for a house and store he built at Otaramarae. Richard Curtis and his wife Puhiawe Ngaki worked their own pit and cut the timber for a weatherboard house for themselves, which they built at Tapuaekura. They also cut timber for a boat built at Tapuaekura, which was named Huhuma.

Te Ruato was the scene of a large meeting of all Ngati Pikiao during 1882. It’s purpose was to decide whether to allow the survey of a road around the lake’s southern shore, which would eventually connect Rotorua with Te Teko. Approval was given, but it was 1895 before survey work actually began. Construction followed, and by June 1896 ist was possible to drive a buggy from Rotorua to Tapuaeharuru.

This shortened text reproduced with kind permission of D.M.Stafford from his book ‘Landmarks of Te Arawa Volume 2: Rotoiti, Rotoheu, Rotoma’ 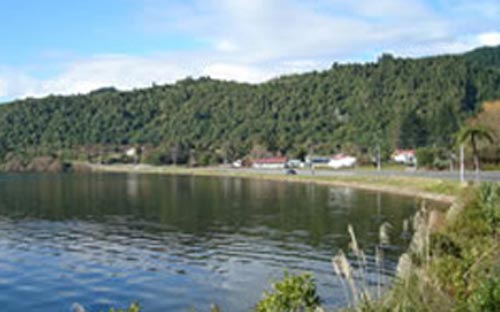