Legend has it that the Manupirua Springs was one of those left by the sisters Kuiwai and Haungaroa while on their way to save their brother Ngatoroirangi. He was perishing with cold on Tongariro Mountain and they were bringing him warmth from Hawaiki. Whenever they paused they left part of the fire they were carrying.

These pauses were frequent and explain the chain of thermal activity stretching from Whakaari (White Island) to Tongariro Mountain. Manupirua was one of the intermediate stops, and since that time has provided the people of Rotoiti with one of the most beautiful natural baths in the district.

The waters of Manupirua have always been regarded as giving relief for rheumatic conditions (which were well known to Maori), and the owners of the spring and surrounding lands (Ngati Hineura and Ngati Rongomai) were hosts to many seeking help. Such help extended to Pakeha, especially to one of the districts earliest resident magistrates, Thomas Henry Smith. Suffering a knee problem, Smith found relief by bathing in Rotoruas thermal waters. There was much affection for Smith, and in 1849 the owners of Manupirua set aside a piece of land near the bath and assisted with the construction of a cottage so that he could spend extended periods there.

Smith was actually carried on a stretcher while the boundaries of his piece of land were pointed out. Two who helped carry the stretcher were Rewiri Manuariki and Te Haimona. Smiths knee improved, and for some years he was able to carry out his duties in the district.

Fascinating account of of 6 gentlemen’s trip in May 1876 from Auckland to the Manupirua Springs on Lake Rotoiti for a two month camp for regular bathing in the pools to help cure their physical ailments. Click here to read.

(From a transcription by Jill Williamson 1994 from a journal by William Outhwaite). 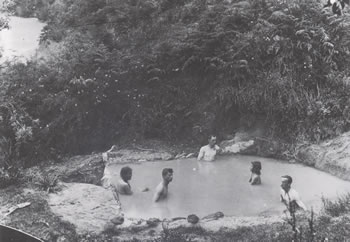