An important early settlement located on the north-eastern side of the headland now referred to as Gisborne Point. About 1820 Komuhumuhu was attacked by an army of Ngati Maru and Ngati Paoa commanded by the chiefs Te Kopara Te Himu, Te Karamu, Te Manukikaitaru and Te Ruinga.

Later Komuhumuhu became a centre for the propagation of Christianity. Remains of Te Rotoiti’s first church (built at Te Mapou, Tapuaekura) were taken to Komuhumuhu during the early 1850s and used in the construction of a church there. This apparently replaced an earlier house, Tomohukahuka belonging to Mere Motuhia in which services had been held.

It seems (although this is uncertain) that once the new church was complete, parts of the older house were used elsewhere: some being given to Petera Pokino for a church he was building on Mokoia Island, and the balance used by Hona Te Hauiti and Te Morehu in the construction of a new house.

When the new church was finally abandoned, probably in the 1860s, it was given by Matene Te Huaki to Utiku. Dismantled by Utiku it was taken and re-erected at Te Awahou where it stood until at least 1906.

The Tairawhiti invasion of 1864 saw Komuhumuhu used as a headquarters for troops of Te Arawa arriving to defend the district. The Tairawhiti army was defeated but much ill-feeling existed in the district because of support offered by some local hapu members to both the invaders and the King Movement in general. As a result several settlements, including Komuhumuhu were abandoned, the residents shifting to the western end of Te Rotoiti.

Despite the early importance of Komuhumuhu, only two named houses are spoken of. One was Tomohukahuka, the other, belonging to Apikaira, was called Tikawe. There were many smaller and apparently un-named houses within the immediate settlement and in adjacent areas to the east.

An Urupa named Kohia was also said to have existed inside Komuhumuhu. Remains were later removed to other nearby urupa.

Reproduced with kind permission from Landmarks of Te Arawa, Volume 2 by D.M. Stafford 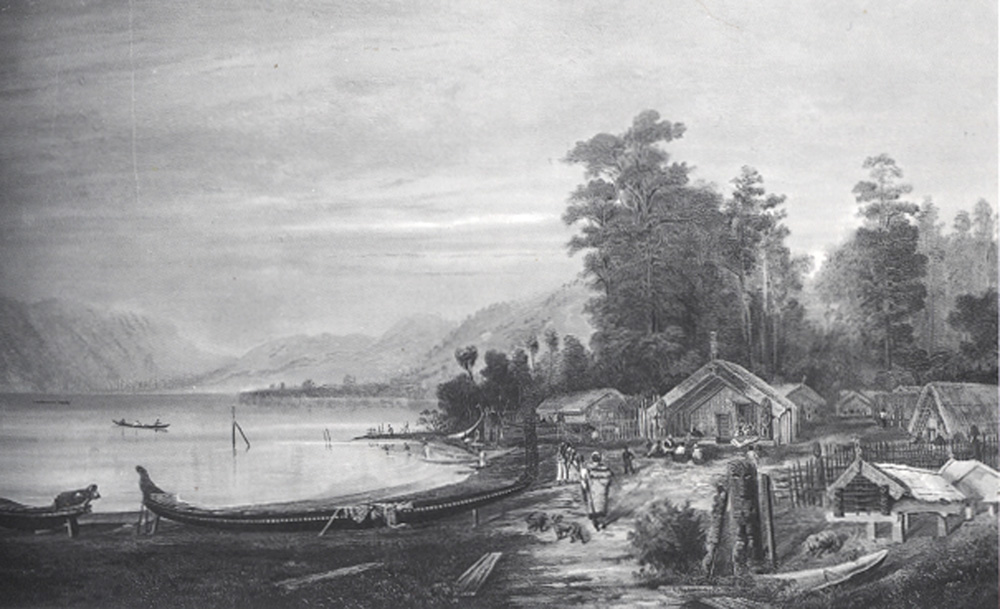 The important settlement Komuhumuhu on the southern shore of Te Rotoiti as depicted by artist Charles Blomfieldc. 1885