Matawhaura is the name given to the prominent mountain and bluffs at the north-east end of Rotoiti, standing above the road and bush between Te Rotoiti and Rotoehu.

Of particular importance to the whole confederation of Ngati Pikiao, it is the site of various pa, cultivations and urupa. Its covering of bush provided forest foods as well as bird and rat-trapping areas, and there were freshwater springs near the summit and lower northern slopes.

The mountain was considered sacred, a place where portents of impending disaster or other events of great consequence were signalled by lightning flashes above its summit.

Specially appointed elders used their influence to protect the mountain. The summit and upper levels lay within the influence of Whakahau, while Te Rangimonenehu watched over the lower slopes.

Tradition has that the name, Matawhaura, given by Tahuwera when first exploring the area together with with Urika, Waitaha and Matamoho. Tahuwera married Pikirarunga, and with the consent of Uruika settled on the mountain. His pa here was Maireraunui. Te Pukekino occupied Matawhaura. While visiting Kawaha Te Pukekino married Rangikahiwa who was visiting from the Patetere area. The pair then returned to Matawhaura. Sometime later a small group of Rangikahiwa’s people Ngati Te Rangitawhia arrived in Rotorua. Rangikahiwa told Te Pukeino she wanted to see them, and she, Te Pukekino and others went in a large canoe, Te Hokowhitu, to Rotorua to fetch them.

Only a few Ngati Te Rangitawhia arrived at Matawhaura, some remaining in Rotorua nad some leaving the canoe at Te Taheke. At the time of their arrival a house named Te Tuhituhi was being built, and the new arrivals assisted in its construction by painting the kowhaiwhai patterns on the rafters, which gave rise to the name. Others speaking of this house assert that it had been built for Patapata’s son, Te Whakahau II, who was to be married to Manuku. However, when the house was nearly finished it was discovered that Te Tawhiti, the chief of Ngati Te Rangitawhia, was making love with Manuka. There was anger over this, particularly against Te Pukekino and Patapata for having brought these people to Matawhaura. To prevent any further trouble, Whakahau and Manuku were married immediately.

It has been claimed that after the couple’s first night together in the house they were found dead in the morning. It was immediately decided that the deaths were due to a makutu placed on them by a tohunga travelling with Ngati te Rangitawhai. Had it not been for the intervention of Patapata the strangers would have been killed; instead they were simply driven away by Ngati Makino and all of Waitaha. Whakahau and Manuku were buried at Te Pakipaki, an ancient pa of Peru and Tutehe at the western end of Matawhaura Mountain.

This shortened text reproduced with kind permission of D.M.Stafford from his book Landmarks of Te Arawa Volume 2: Rotoiti, Rotoheu, Rotoma. 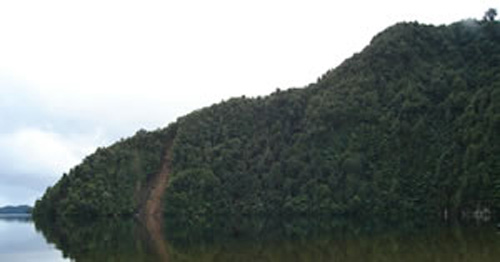