Settlement and valued cultivation area at the northernmost point of Te Rotoiti near its western end. It once provided a major departure and arrival point for those travelling between the lake and coast at Maketu. It was also the site, at Pounamunui, of an important house named Houmaitawhiti, built near the lake edge by the noted carver Puwhakaoho II about 1820. With the threat of a Ngapuhi invasion in 1823 the house was dismantled and the carvings buried for safety. Some years later they were recovered but found to be badly decayed.

At least one poupou survived and was used an a house built about 1860. Also named Houmaitawhiti, it was carved by Wero and Pita Te Wharetoroa, a son of Puwhakaoho II. Another carver for this house was Te Ahoaho, who was later killed fighting against the British at Gate Pa. At least some of the poupou for the 1860 house were made from a canoe Ahitaunoa, which was given to Pita Te Wharetoroa by Ema Te Kirikau.

By the end of the decade many of Te Arawa had settled at Maketu, and Ngati Pikiao decided that Houmaitawhiti should be with them. It was dismantled, carried piece by piece to Maketu and re-erected in the main pa there. Of considerable importance was its reopening during December 1870 by New Zealand’s first royal visitor, Alfred, Duke of Edinburgh.

Land Court hearings and development in the Rotorua/Rotoiti area during the 1880s saw a return to these districts of many from Maketu. Houmaitawhiti, left behind and largely unattended, became derelict and ultimately in danger of collapse. In 1901 it was again dismantled and stored away until 1912, when the old house was returned to Otaramarae by a team under Te Reiwhati Vercoe and re-erected on its present site. On this occasion heavy timbers taken from the abandoned flour mill at Pukeko were used in the structure. Tene Waitere was engaged to prepare additional and replacement carvings and the completed building was officially re-opened in 1913.(?)

During the 1960s a decision was made to restore Houmaitawhiti. The original 1870 maihi were placed on loan with Rotorua’s Art and History Museum and replacements (and other pieces) were prepared by the carvers Tuhaka Kapua, his son Tony, Taunu ‘Doc’ Taepa, and Thompson Tahuriorangi. The work was supervised by Mana Thomas, and on 18th April 1970 the restored house was officially opened by Duncan McIntyre, Minister of Maori Affairs.

Reproduced with kind permission from Landmarks of Te Arawa, Volume 2 by D.M. Stafford

Recollections of canoeing to Otaramarae to collect mail and provisions around 1949. Click here to read.

Recollections of Otaramarae around in the 1940s and the role her father and local iwi played in the development of Otaramarae Rd and Whangamoa Drive through to 1965. Click here to read.

Both articles by Caroline Main, daughter of the late Leonard Leary QC who, apart from providing much assistance to local causes, was closely involved with the early proponents highlighting the deteriorating lake water quality in Rotoiti, i.e. 'Guardians of the Lake' and 'The Lakeweed Society’. 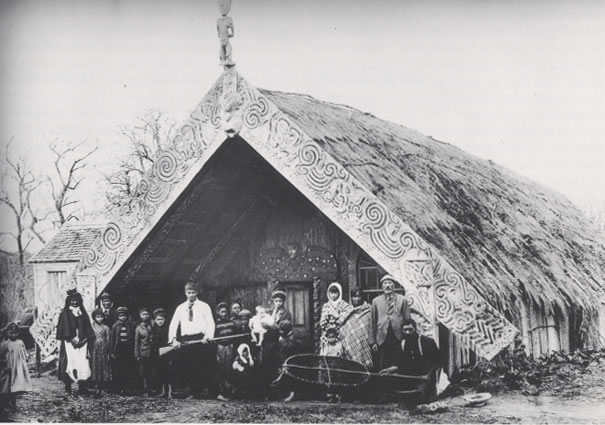