The above application for the temporary variation to Rotoiti lake levels (one-off drop to RL278.85m) was further notified on 15 November 2021 to the owners of boat ramps and boat sheds along with jetty owners that were not included in the first round of limited notification. These parties will have 20 working days from the date of notification to make a submission. It is understood that the Applicant may seek a Pre-Hearing but any further progress will not eventuate until early 2022. 91 submissions have been received from the original notification with 86 of these in partial or total opposition.

The BOP Regional Council and the Ngāti Pikiao Environmental Society jointly propose a Consent Variation to facilitate a trial which will seek to provide for a one-off occurrence whereby water levels within Lake Rotoiti will be drawn down to RL 278.85m and held there for seven days, before being returned to the trial target range of RL 279.10m – 279.20m.  Limited Notification to this effect has been approved to be sent to Lake Rotoiti structure owners along with Classic & Wooden Boats Society and BOPTYS (we are aware that not all structure owners have received it).

LRCA is aware of the ongoing unrest amongst many of our members and other sections of the community generated by this recent limited Notification of the Proposal due primarily, we believe, due to some critical ambiguities contained in the AEE (Assessment of Environmental Effects) sent out with the Notification.  We have addressed these and associated matters in the recent mail-outs to our database and in our submission to the Proposal.

Lake levels have generally been held within the normal operational range since late April. However, there have been a couple of glitches.

Lake Rotoiti lake levels have been challenged by various long dry spells and some significant short bursts of rainfall since April. For the most part, levels have remained within the normal operating range RL279.10 - 279.20 metres above Moturiki Datum over this period excepting for a week or so in late June when the Okere gates arguably remained open for too long after a significant rainfall event and again more recently as noted below.

During the latter part of August, Rotoiti lake levels fell below the normal operating range RL279.10 – 279.20. This was due primarily to the distinct lack of rainfall over this period and the operational requirement to prevent reflux (backflow of water) around the Ohau Channel Wall. Given these circumstances, BoPRC decided to take the opportunity with falling levels to carry out the annual ‘winter drawdown’ as required by the existing Operational Rules ( a current recommendation for this to be discontinued is under consideration). Regrettably, Council was remiss in not public notifying the event which is mandatory for any decision to implement discretionary drawdown of lake levels below the operating range. Consequently, a formal complaint was lodged by the Lake Rotoiti Classic and Wooden Boat Association. This has been acknowledged by BoPRC and an apology issued.

For clarity, a Consent priority now requires precedence for Okere/Kaituna River outflows to be equal to or greater than Ohau Channel inflows to avert reflux (backflow of nutrient laden Lake Rotorua water into Lake Rotoiti), aiding the enhancement of water quality in Lake Rotoiti. This regime applies under all weather situations, therefore in times of extended drought, Lake Rotoiti levels may continue to fall well below the normal operational minimum as has occurred in recent summers. Flow rates on the Ōhau Channel and through the Okere Gates are monitored at BoPRC by telemetry using NIWA’s lake level recorder at Mission Bay on Lake Rotorua and the Taaheke River Gauge Station on the Kaituna River, located downstream of the Control Gates.

Any incidence of reflux around the Ohau Channel Wall triggers an alert at BoPRC which prompts an immediate adjustment to gate settings.

BoPRC’s revised application for the temporary (3-year) variation to Rotoiti lake levels continues to await a final recommendation from the independent consultant agency and subsequent approval by BoPRC’s Regulatory Arm. There is some indication that an outcome is not too far away.

The annual meeting of the Rotorua Te Arawa Lakes Operational Liaison Group (RTALOLG) was held on 5 August 2021. The Group was formed as a condition of the 2012 Resource Consent Renewal to provide for ongoing discussion and feedback in respect of lake level management and control. RTALOLG is comprised of various interest groups including LRCA which currently has two nominated representatives ( Jim Stanton and Hilary Prior). Minutes of the meeting can be found HERE.

A reminder that you can access data and information regarding Rotoiti lake levels HERE. Dropdown from ‘Data’ and click on ‘Data Set’, then use the dropdown from ‘Location’ and select ‘FL289316 Lake Rotoiti at Okawa Bay’. Alternative date periods can be selected in the ‘Date: Latest Data’ menu.

The 2021 year has begun similarly to 2020 with a prolonged period of drought, rainfall being well below historical averages. Existing operational consent conditions require Okere Gate outflows to equal or exceed inflows from Lake Rotorua to optimise lake water quality by preventing reflux back into Lake Rotoiti. Accordingly levels have remained considerably below the aspirational range minimum of RL279.10m.

BoPRC’s Application for a temporary trial (see below) was formally lodged in late July 2020 following an extended community consultation process. The Application was then referred to an external Environmental & Planning Consultancy for assessment of environmental effects. Due to extenuating circumstances further progress was delayed until late 2020 and the Application continues to remain awaiting recommendation and ultimate decision by BoPRC’s Regulatory Arm.

Our PowerPoint presentation to the January 2021 AGM covering the consent application process to date may be accessed HERE.

Further progress will be advised in due course and/or when any deliberate low-level drop is proposed to take place. LRCA has insisted that it occur outside of prime time lake usage periods (preferably after Easter).

A proposal put forward by BoPRC in late 2019 seeks to undertake a 3-year trial consisting of a modified operational management regime for Lake Rotoiti including a one-off drawdown to a targeted low level of 278.85 held for one week (in lieu of the winter flush) to allow iwi, in particular, and other stakeholder representatives to observe the various impacts first-hand and decide whether any operational changes could be warranted. The Rotorua Te Arawa Operational Liaison Group, on which LRCA is represented, met in November 2019 and unanimously agreed to support this proposal in principle. A more detailed report is contained in our newsletter of December 2019. The matter was subjected to considerable debate at our January 2020 AGM. An Application to vary the existing Consent based on the above proposals has been lodged by BoPRC and currently awaits decision. If granted, BoPRC intend to organise a boat trip around the lake and include representatives of the various stakeholder groups to observe and record what impacts this low level has on the lake environs and its residents.

In July 1972 the Bay of Plenty Catchment Commission (BOPCC - Regional Water Board) promulgated revised Water Right applications for proposed proposed new diversion and discharge works to increase flows and alleviate flooding and high lake levels in and around Lakes Rotorua and Rotoiti as part of the overall flood control scheme for the Kaituna Catchment. Details of the proposed works were to:-

The diversion cut never eventuated but the control gates at Okere were eventually installed in 1982 and the control weir at the head of the Ohau Channel in 1989.

After concerns were raised by this Association in the mid 1990s during prolonged periods of low lake levels, the original consents were officially reviewed by the controlling body, Bay of Plenty Regional Council (BoPRC) resulting in amended conditions being promulgated in late 1996 to provide for a narrower operating range. This regime prevailed until 2009 when, with the consents due to expire, Ngāti Pikiao iwi representatives began a campaign for a return to natural lake fluctuations and the removal of the Okere Control gates on the premise that its existence and operational management had caused significant detrimental impacts on the lake ecology and on local communities in terms of their economic, social, environmental and cultural well-being.

Following initial consultation hui between BoPRC and local iwi, Council promulgated a proposal to renew the consents, details of which were summarised in the LRCA Newsletter of December 2009. The intention to operate Rotoiti lake levels within a much wider range raised immediate concerns relating to the potential impact on the improvement in lake water quality since the construction of the $10 million Ohau Diversion Wall designed to direct nutrient-laden Lake Rotorua outflow towards the Kaituna river and away from the body of Lake Rotoiti. There were also implications of increased potential for property inundation and likely impact on the ability to pursue boating and recreational activities on the lake.

A public meeting convened by LRCA on 3 January 2010 attracted a huge attendance with more than 550 residents and interested parties gathered to hear and express concerns over the new proposals. The meeting mandated LRCA ‘to seek retention of the Okere gates and existing consent conditions, and represent the community in conducting negotiations and proceedings as it saw fit’. Subsequently, a number of consultation meetings and open days were held resulting in a revised Consent Application being notified by BoPRC in July 2010. Following multiple submissions, with LRCA having been further mandated to support the amended proposals, the case was heard in front of three Environment Commissioners culminating in a favourable decision being notified in late January 2011.

However, an appeal lodged with the Environment Court by the Ngāti Pikiao Environmental Society prolonged the implementation of the revised Consents and Operating Conditions. This resulted in various mediation meetings being held after which Consent Condition Amendments were finally agreed to by all parties and signed off on 26 March 2012. A comprehensive and detailed outline of all proceedings can be found in the Association newsletters of 2010 through to August 2012, (which are archived on this website). Since that time, Ngāti Pikiao has produced a Cultural Impact Assessment of Rotoiti lake level management which further identified a number of the afore-mentioned issues of importance to local iwi. These issues have been subject to ongoing discussion and debate primarily between BoPRC, Iwi and LRCA. 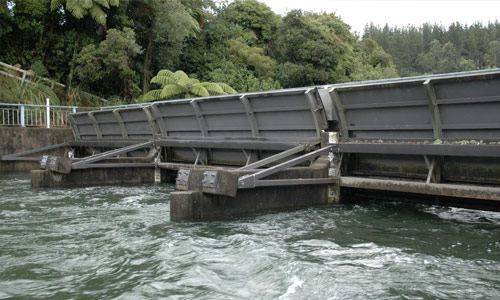