The tract of bush lying between Rotoiti and Rotoheu bordering SH30 and generally refered to as Hongi’s Track is also known as Te Tahuna. Tradition claims its original (and correct) name is Omatatahuna. Others spoke of this bush as Wharepakira-o-Ngati Hinehinu and Te Whakamaru-ra-o-Hinehopu.

The track, now followed by the highway was said to be Te Ara-o-Hinehopu because it was used often by the ancestress Hinehopu. She travelled regularly between her two homes, one at each end of the track. It was also halfway along this track that she met her future husband Pikiao II; the precise spot is marked by Te Rakau-tipua-a Hinehopu (Hinehopu’s magic tree). Hinehopu planted the tree as a sapling to mark the spot. The tree is today more generally spoken of as the Wishing Tree. Many fanciful tales have been introduced to account for the tree and its name.

It was over this same track that Hongi Hika and his Ngapuhi army hauled their canoes in order to attackMokoiaIslandat Rotorua. Much later, and probably as a result of a blossoming tourist industry, the roadway became known as Hongi’s Track.

A fenced memorial stone on the edge of the road and close to the Taupo Stream (within Te Tahuna) marks the site where the chief Te Amotu Takaanewa was killed by a party of Hongi’s warriors. The generally repeated story is that Takaanewa was travelling from Rotoehu to Te Rotoiti with his family when he was met by a party of Ngapuhi returning after their raid onMokoiaIsland. Takaanewa fearlessly remained facing the enemy alone, enabling his family to escape into the bush before he was subdued and killed. 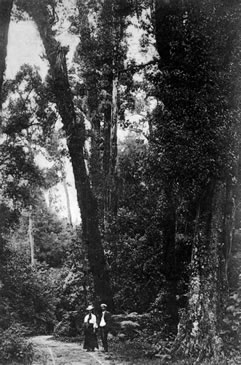