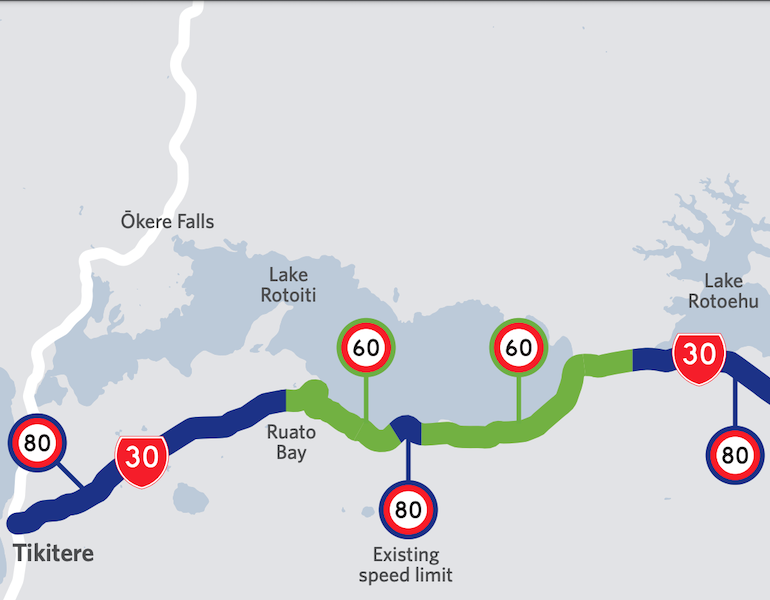 We are very pleased to advise that Waka Kotahi has proposed that the SH30 speed limit be lowered to 60kph for all but 1km of the 11kms between Moose Lodge to the Eastern end of Hongis track as submitted by LRCA.

But their proposal differs from our submission as follows

They have NOT proposed that the reduced speed of 60kph be introduced for the 1km between Ruato Bay to Gisborne Point, instead proposing that the current 80kph limit be retained.

We are very concerned about

* The likelihood of traffic entering Ruato Bay and Gisborne Point continuing at 80kph when they should slow to 60kph.

* The risk that motorists will take the increase speed 80kph sign as a signal that they can overtake where vision is severely restricted and it would be extremely dangerous to do so.

* The risks to all of residents north east of Ruato Bay joining and exiting the highway with extremely limited vision.

* The risk to pedestrians crossing and walking on the highway where there are no footpaths.

When introducing the proposed speed limits Waka Kotahi themselves comment that: “People asked for more consistent and safer speeds to slow down traffic, to discourage drivers from accelerating and decelerating at tight corners and along the straights”.

What you can do to make our roads safer

1. Submit your support for the 60kph safer speed proposed.

2. Submit your request for the reduction of the 80kph speed limit to 60kph between Ruato Bay and Gisborne Point and

3. Provide your comments to us by answering this short Supporters Survey.

Note - submissions must be in by 18 February

LRCA will in turn make our own submission supporting the proposed reduced speed limits and requesting the section between Ruato Bay and Gisborne Point be reduced to 60kph.