Lake Level Draw Down and Report 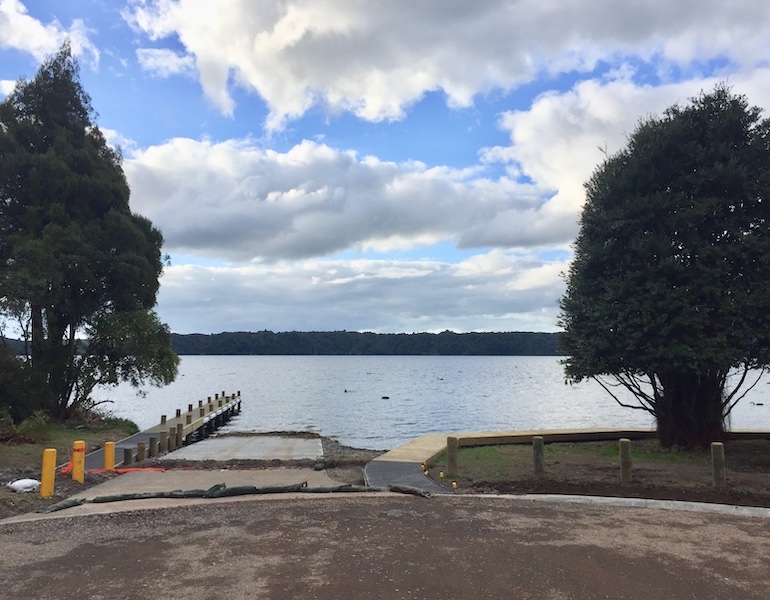 This ramp is intended for small boats, and to remove some of the pressure on the original deeper water ramp at Komuhumuhu, Gisborne Pt which remains.

A new turn-around area that's been created to prep boats for launch and do a pest inspection on leaving the water. It's all ready to to be sealed now. The ramp and jetty are completed, as is retaining around the edge of the reserve to the beach (not in shot). There is still further work to do on landscaping the reserve and signage, but the ramp will be open for use by the start of the new fishing season in October.

You can also see the bollards that have gone in to stop vehicles driving over the whole reserve (meaning it can still be used by families and children for play and picnicking) while creating an angled parking area for cars and trailers - the original kerb has been removed and replaced with a sloping edge to allow vehicles to drive over.  This will be a great addition to the Gisborne Point community, thank you to everyone who has worked so hard on it!

RLC have recently carried out maintenance on the road surface adjoining the Ōtaramarae boatramp.  There have been ongoing negotiations with adjacent landowners in attempting to increase the footprint of the parking area at this location which has been under pressure for many years.  The toilet block is also awaiting upgrade.  Unfortunately, there remain some obstacles in this process which, if resolved, could then be targeted in a request to the Tourism Infrastructure Fund.