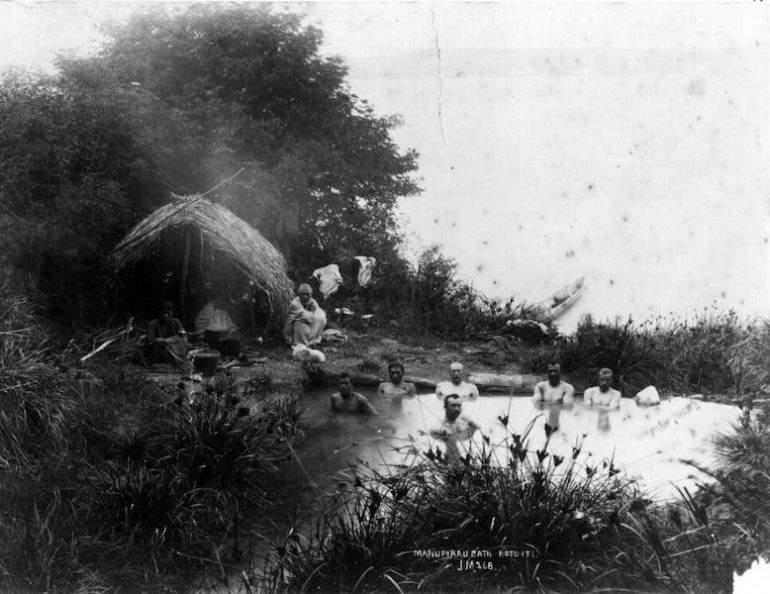 Recollections of canoeing to Otaramarae to collect mail and provisions around 1949. Click here to read.

Recollections of Otaramarae around in the 1940s and the role her father and local iwi played in the development of Otaramarae Rd and Whangamoa Drive through to 1965. Click here to read.

Both articles by Caroline Main, daughter of the late Leonard Leary QC who, apart from providing much assistance to local causes, was closely involved with the early proponents highlighting the deteriorating lake water quality in Rotoiti, i.e. 'Guardians of the Lake' and 'The Lakeweed Society’.

The story of the Rotoiti Timber Company from its establishment, (on the site of the Okawa Bay VR Lake Resort at Mourea), in the early 1920’s through to its demise in 1942. Click here to read.

Only 7 years old at the time, Aunty Meriha Epiha recalls when the Okawa Bay Timber Mill was in full swing, from the early 1920s to the late 1930s, when she and her girlfriends played there. Click here to read.

(A childhood memory by Raiatea Tahana Reece from the West Rotoiti News - Spring 1986).

A tale of a kauri barge built by Logan Brothers for use on Rotoiti which caught fire and burnt providing wood for the Te Puia Carving School and Master Carver Albert Te Pou who’s work can be seen at Rotorua Museum.Click here to read.

(As related by Michael and Hilma Gill - former residents of Okawa Bay.)

Fascinating account of of 6 gentlemen’s trip in May 1876 from Auckland to the Manupirua Springs on Lake Rotoiti for a two month camp for regular bathing in the pools to help cure their physical ailments. Click here to read.

(From a transcription by Jill Williamson 1994 from a journal by William Outhwaite).

(The 1984 submission made to the Waitangi Tribunal by the late Stanley Newton, a leading and greatly respected kaumatua of Ngāti Pikiao and Te Arawa).